By JOE McDONALD and VICTORIA MILKO

BEIJING (AP), Media www.rajawalisiber.com — China’s landing of its third probe on the moon is part of an increasingly ambitious space program that has a robot rover en route to Mars, is developing a reusable space plane and is planning to put humans back on the lunar surface. 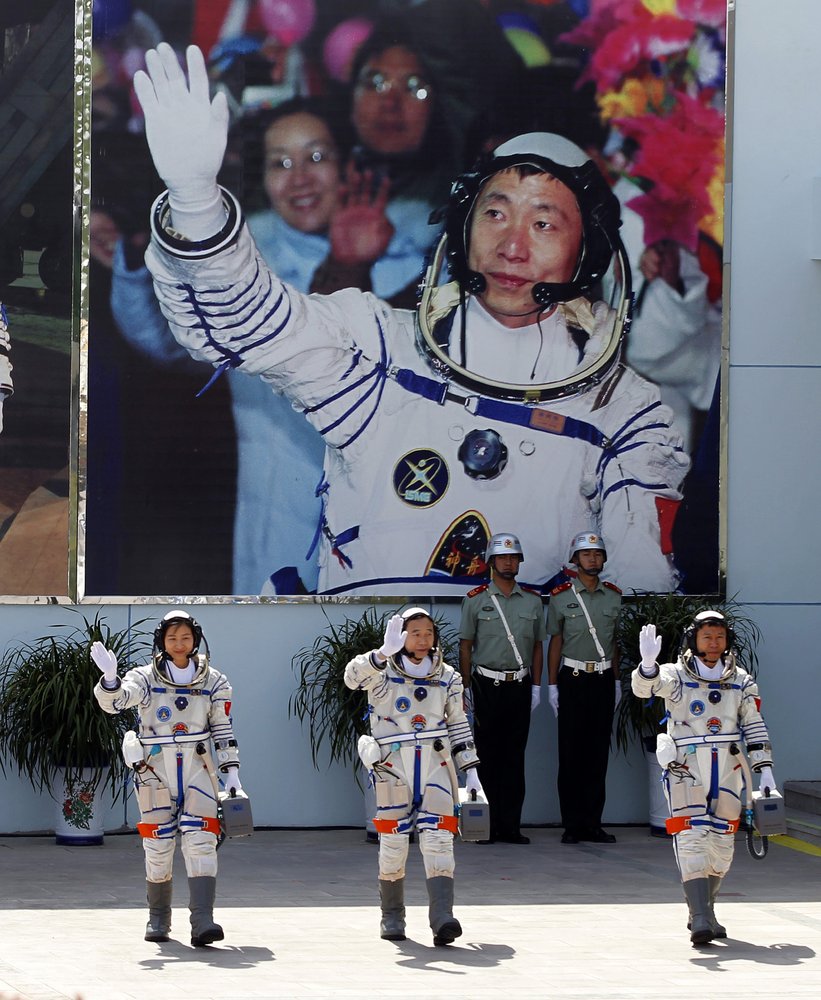 FILE – In this June 16, 2012 file photo, Chinese astronauts from left, Liu Yang, Jing Haipeng and Liu Wang wave and walk before a giant portrait of China’s first astronaut Yang Liwei, as they depart for the Shenzhou 9 spacecraft rocket launch pad at the Jiuquan Satellite Launch Center in Jiuquan, China. China’s landing of its third probe on the moon is part of an increasingly ambitious space program that has a robot rover en route to Mars, is developing a reusable space plane and plans to put humans back on the lunar surface. (AP Photo/Ng Han Guan, File)

The Chang’e 5, the first effort to bring lunar rocks to Earth since the 1970s, collected samples on Wednesday, the Chinese space agency announced. The probe landed Tuesday on the Sea of Storms on the moon’s near side.

Space exploration is a political trophy for the ruling Communist Party, which wants global influence to match China’s economic success.

China is a generation behind the United States and Russia, but its secretive, military-linked program is developing rapidly. It is creating distinctive missions that, if successful, could put Beijing on the leading edge of space flight.

The coming decade will be “quite critical” in space exploration, said Kathleen Campbell, an astrobiologist and geologist at The University of Auckland.

“This is where we’re going to transform out of near Earth orbit and back into what people will call ‘deep space,’” Campbell said.

In 2003, China became the third nation to launch an astronaut into orbit on its own, four decades after the former Soviet Union and the United States. Its first temporary orbiting laboratory was launched in 2011 and a second in 2016. Plans call for a permanent space station to be launched after 2022.

This week’s landing is “a historic step in China’s cooperation with the international community in the peaceful use of outer space,” said a foreign ministry spokeswoman, Hua Chunying.

“China will continue to promote international cooperation and the exploration and use of outer space in the spirit of working for the benefit of all mankind,” Hua said.

After astronaut Yang Liwei’s 2003 flight, space officials expressed hope for a crewed lunar mission as early as this year. But they said that depended on budget and technology. They have pushed back that target to 2024 or later.

The space agency gave no reason for landing its latest probe on the Sea of Storms, far from where American and Soviet craft touched down. But the choice might help to shed light on possible sites being studied for a crewed mission.

Beijing’s space plane would be China’s version of the American Space Shuttle and the former Soviet Union’s short-lived Buran.

China also has launched its own Beidou network of navigation satellites so the Communist Party’s military wing, the People’s Liberation Army, doesn’t need to rely on the U.S.-run GPS or a rival Russian system.

Last year, China graduated from “me too” missions copying Soviet and American ventures to scoring its own firsts when it became the first nation to land a probe on the moon’s little-explored far side.

That probe, the Chang’e 4, and its robot rover still are functioning, transmitting to Earth via an orbiter that passes over the moon’s far side. China’s first moon lander, the Chang’e 3, still is transmitting.

China’s earliest crewed spacecraft, the Shenzhou capsules, were based on Russian technology. Its powerful Long March rockets are, like their Soviet and American predecessors, based on ballistic missiles developed using technology seized from Nazi Germany after World War II.

China has proceeded more cautiously than the breakneck U.S.-Soviet space race of the 1960s, which was marked by fatalities. China’s crewed missions have gone ahead without incident. Some launches of robot vehicles have been delayed by technical problems but those appear to have been resolved.

China is in a growing space rivalry with Asian neighbors Japan and India, which it sees as strategic competitors. Both have sent their own probes to Mars.

While Chang’e 5 gathers moon rocks, Japan’s space agency just pulled off the even more challenging feat of obtaining samples from an asteroid, Ryugu. The Hayabusa2 mission is due to deliver those to Earth on Saturday.

As its confidence grows, Beijing’s space goals have multiplied.

It has joined the race to explore Mars, and its Tianwen-1 probe, launched in July carrying a robot rover to search for signs of water, is due to complete its 470-million kilometer (292-million mile) journey in February.

Plans call for a permanent crewed space station as early as 2022.

China is excluded from the International Space Station due to U.S. opposition to including Chinese military officers in a venture that otherwise is operated by civilian space agencies.

Despite its successes, the military-run Chinese program is more secretive than those of other governments.

Yang and other Chinese astronauts made only a handful of brief public appearances following their flights, in contrast to Soviet and American astronauts who were sent on global publicity tours before cheering foreign crowds.

The agency announced in September its space plane had completed a successful test flight but has yet to release details or even a photo of the craft. (News Sources: THE ASSOCIATED PRESS)

The Associated Press Health and Science Department receives support from the Howard Hughes Medical Institute’s Department of Science Education. The AP is solely responsible for all content.