By TOI STAFF and RAPHAEL AHREN

Media www.rajawalisiber.com – Bahrain will distinguish between Israeli goods from disputed territories and those made in Israel proper, the country’s foreign minister said on Saturday, in comments that walked back a statement made earlier in the week by the Gulf kingdom’s trade minister.

Speaking at a security conference in Manama, Bahrain Foreign Minister Abdullatif bin Rashid Al Zayani said he spoke with Palestinian Authority Foreign Minister Riyad al-Maliki on Friday and clarified Bahrain’s view on the import of products from West Bank settlements as well as the Golan.

On Friday evening, the Industry, Trade and Tourism Ministry of Bahrain issued a statement saying that remarks a day earlier by the trade minister had been “misinterpreted” and that Manama remained “committed to UN, Arab League and the Organisation of Islamic Cooperation resolutions regarding settlements in the West Bank and the Golan Heights.” 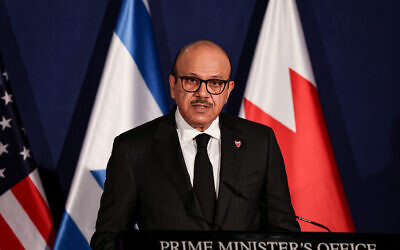 Bahrain’s Foreign Minister Abdullatif bin Rashid Al Zayani speaks during a press conference with the US Secretary of State and Prime Minister Netanyahu after their trilateral meeting in Jerusalem, November 18, 2020. (Menahem Kahana/Pool/Flash90)

United Nations Security Council Resolution 2334, which was passed in 2016, calls on all countries to “distinguish, in their relevant dealings, between the territory of the State of Israel and the territories occupied since 1967.”

The ministry statement was made after Industry, Commerce and Tourism Minister Zayed R. Alzayani told reporters in Jerusalem on Thursday that all goods and services offered by Israelis will be treated as products of Israel, indicating that even goods from the West Bank and the Golan will not require special labels.

When asked by The Times of Israel if goods from settlements in the West Bank and Golan Heights were welcome in Bahrain and can be marketed as “Products of Israel,” Alzayani responded in the affirmative.

“So we will not go into the details [but] we will recognize them as Israeli products. And all Bahraini products, hopefully, will be recognized in Israel as Bahraini products. I don’t see, frankly, a distinction on which part or which city or which region it was manufactured or sourced from,” Alzayani said. 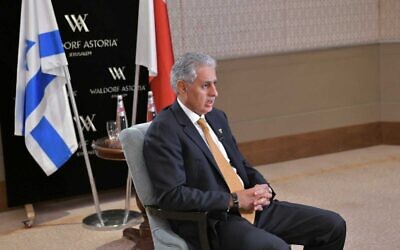 A senior member of the Palestinian Liberation Organization immediately denounced his position, saying it ran contrary to international consensus. Wasel Abu Youssef also called for Arab states not to import goods from Israel to thwart it from “stretching into Arab markets to strengthen its economy,” according to Reuters.

The Bahraini minister’s position had appeared to align with new US guidelines which requires that all goods produced in areas where Israel exercises civilian control, including West Bank settlements, be marked  “Product of Israel” or “Made in Israel.”

However European Union policy since 2015 requires products made by Israelis in the West Bank, East Jerusalem and the Golan to be labeled as such, and does not allow them to be marketed as products of Israel. Other countries, such as South Africa, have implemented similar labeling requirements.

Alzayani came to Israel Tuesday as the head of a delegation that included some 40 businesspeople and officials. It was the second ministerial visit from Bahrain to Israel in as many weeks. He met with Prime Minister Benjamin Netanyahu and several cabinet ministers, discussing ways to expand bilateral trade.

His visit comes just two weeks after Bahrain’s foreign minister became the first minister from the tiny Gulf kingdom to visit the Jewish state. (News Sources: The Times of Israel).