Assadollah Assadi, 3 other suspects face life in prison if convicted for plan to attack National Council of Resistance in Iran event outside Paris in 2018

BRUSSELS (AFP), Media www.rajawalisiber.com — An Iranian diplomat goes on trial in Belgium on Friday accused of plotting to bomb an opposition rally outside Paris, in a case that has stoked tensions with Tehran.

In June 2018 Belgian authorities thwarted what they said was an attempt to smuggle explosives to France to attack a meeting of one of Iran’s exiled opposition movements.

Later that year, the French government accused Iran’s intelligence service of being behind the operation, a charge the Islamic Republic has furiously denied. 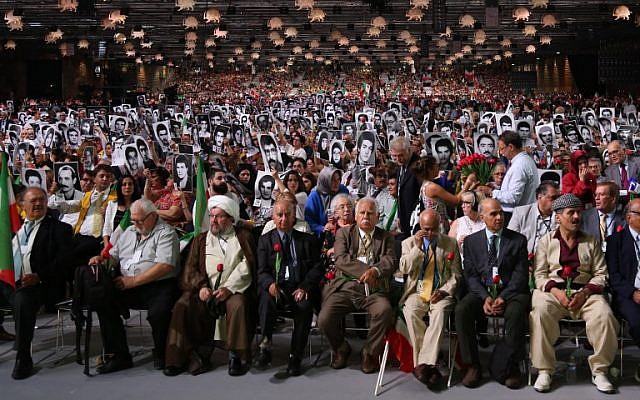 People hold pictures of relatives killed by the Iranian regime during the ‘Free Iran 2018 – the Alternative’ event on June 30, 2018, in Villepinte, north of Paris. (AFP Photo/Zakaria Abdelkafi)

On the same morning, Belgian police intercepted a Belgian-Iranian couple driving from Antwerp and carrying half-a-kilo of TATP explosives and a detonator.

All four are charged with attempting to carry out a terrorist attack and taking part in the activity of a terrorist group. All face life sentences.

Assadi was arrested while he was traveling through Germany where he had no immunity from prosecution, being outside of the country of his diplomatic posting.

Arefani, an Iranian poet who had lived in Belgium for more than a decade, was arrested in France in 2018 after Belgium issued an European arrest warrant.

Counsel representing those targeted by the alleged attack say Arefani was close to Assadi, said to be the architect of the plot, and point to an Austrian SIM card found in his possession.

The two men deny any connection.

“We are looking at a clear case of state terrorism,” said lawyer Georges-Henri Beauthier, who is representing the interests of the NCRI, along with French colleague William Bourdon.

Dimitri de Beco, defense counsel for Assadi, has accused the civil plaintiffs of trying to turn the case into a political trial on behalf of the opposition movement.

According to Iran expert Francois Nicoullaud — a former French ambassador to Tehran — Iran’s President Hassan Rouhani was surprised to learn about the failed attack.

“Visiting Europe at the time, he was absolutely furious to learn about this intelligence service operation, on which he hadn’t been consulted,” the diplomat told AFP. 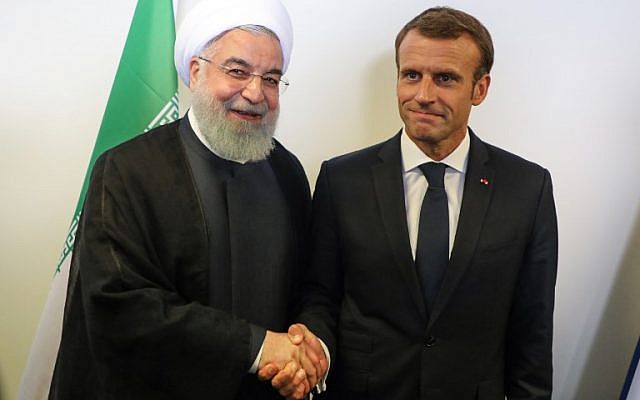 French President Emmanuel Macron meets with Iranian President Hassan Rouhani on the sidelines of the UN General Assembly at the UN headquarters on September 25, 2018, in New York. (AFP Photo/ludovic Marin)

At the time of the alleged plot, Rouhani was trying to maintain the support of European capitals for the 2015 Iran nuclear deal, which US President Donald Trump had abandoned.

When Paris pointed the finger at Iranian intelligence, an Iranian spokesman voiced denial and alleged that opponents of the deal in “certain quarters” were attempting to frame Tehran.

That idea was dismissed by observers like Nicoullaud as a smoke screen. “It’s not serious,” he said.

The trial is scheduled to take two days, Friday and then Thursday next week. The court is then expected to adjourn to consider its verdict before ruling early next year.