Welcome to the Wall of Spies

Washington D.C. Media www.rajawalisiber.com – The Wall of Spies Experience is an extraordinary collection of information, imagery and artifacts detailing America’s history with espionage and betrayal. Sponsored by the National Counterintelligence and Security Center , and enabled through the efforts of dozens of intelligence professionals, the private exhibit includes more than 200 tales of espionage from our country’s founding to contemporary times.

A first look at the Wall of Spies, a special exhibit housed at the Intelligence Community Campus Bethesda, Maryland.

The Evolution of Espionage

The Wall of Spies Experience includes detailed accounts of more than 135 spies who betrayed America, from the Revolutionary War to the 21st century, as well as the tradecraft they used, from ciphers, to dead drops, to digital encryption. Broken down by era, the exhibit covers: the American Revolution, the American Civil War, World War I, World War II, the “Golden Age of Soviet Espionage”, the Cold War, and post-Cold War periods.

From the American Revolution to the cyber revolution, spies among us have caused lasting damage to our national security. And just as our adversaries and the threats we face continue to evolve, counter-intelligence and security professionals–as custodians of our nation’s secrets–must evolve as well. Vigilance, resolve, and the capacity to absorb the lessons of the past are the foundations for safeguarding our future.

The exhibit also features a display of images of Cold War espionage concealment devices, an array of physical artifacts, and incorporates historical footage of espionage and sabotage stories. These videos range from the German sabotage of a U.S. weapons depot in 1917 to the FBI’s Operation Ghost Stories investigation into Russian illegals in American that culminated in 2010. The Wall of Spies Experience also includes wall-sized maps of the greater Washington, DC area and New York City, identifying 39 locations that involve significant spying episodes.

A collection of artifacts, as well as a small library of books on espionage and counterintelligence, enrich The Wall of Spies Experience.

The Founding Father of American Counterintelligence

The evolution of espionage in America is also the story of the evolution of counterintelligenceefforts. The Wall of Spies Experience pays tribute to one of our nation’s founders, John Jay, who in addition to being the sixth President of the Continental Congress, a drafter of the Federalist Papers, and the first Chief Justice of the United States, also led our first major counterintelligence operation. This included the unravelling of a British plot to kidnap–or kill–General George Washington. The Wall of Spies Experience recognizes John Jay as the founding father of American counterintelligence.

The Soviet Wall of Shame

The Soviet Wall of Shame highlights six high-ranking Soviets who spied for the West and changed the course of the Cold War. These spies were heroes to the West, but among the most damaging in history to the Soviet Union. Five of these spies were caught and executed by the Soviet Union, but the sixth survived after a daring escape and is today living in the West. 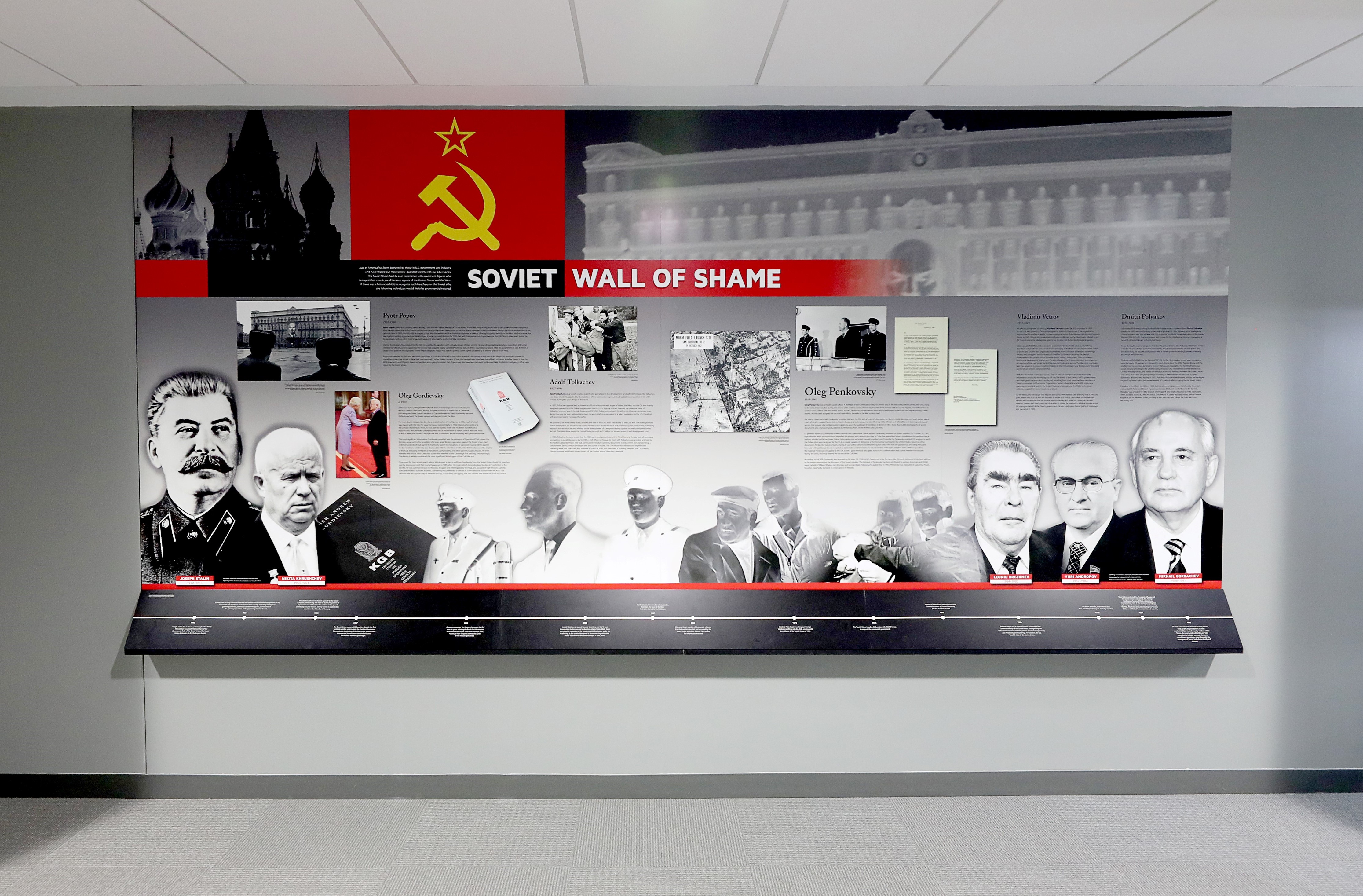 The Soviet Wall of Shame details Soviets who spied for the West and who’s efforts changed the course of the Cold War.

Two-and-a-half years of research, design and development, culminated on September 19, 2019, with a ribbon-cutting ceremony at the Intelligence Community Campus in Bethesda, Maryland, signaling the completion of the Wall of Spies Experience installation. National Counterintelligence and Security Center Center Director, William Evanina and NCSC Executive Director, Patty Larsen led the event and offered attendees a first look at the new exhibit.

This new museum has a history of its own, dating back more than a decade. In 2004, one of the founders of the International Spy Museum, and a former CIA officer donated what was known as the “Wall of Shame” to NCSC’s predecessor organization, the Office of the National Counterintelligence Executive. The Wall of Shame consisted of 72 American and foreign spies discovered from the 1930s to 2004. 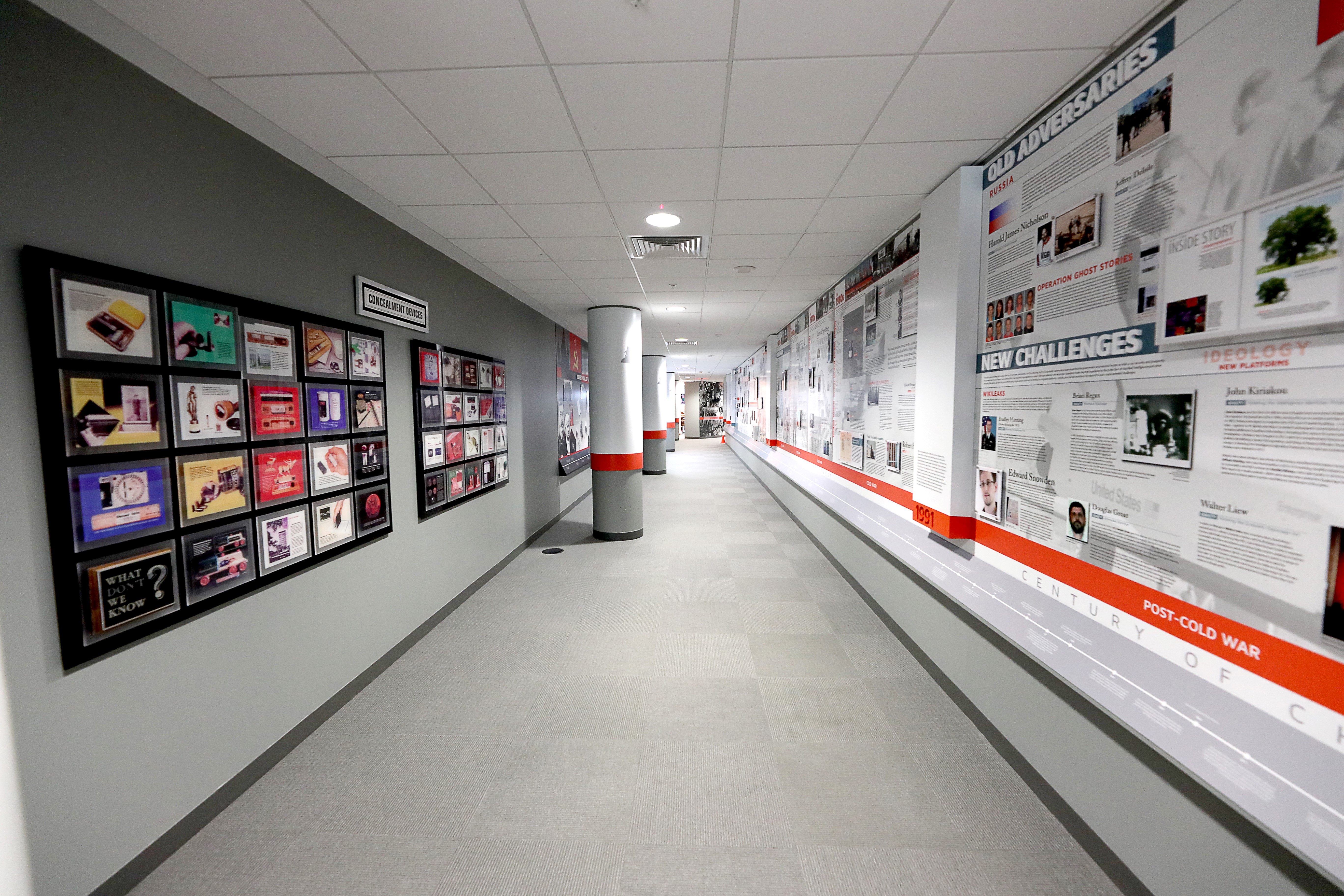 A look through The Wall of Spies Experience, and a look ahead to a digital version of the exhibit, accessible to the public.

In 2017, NCSC decided to update the Wall of Shame with a much broader vision that would document and display the history of espionage and sabotage in the United States in a modern way and in keeping with museum-quality standards. After two and a half years of research and analysis, NCSC completed the Wall of Spies Experience in September 2019. The project will continue, as the Wall of Spies exhibit is adapted for public view on Intelligence.gov.

The Wall of Spies is meant to be an evolving and poignant reminder to us all that there will always be spies among us who seek to undermine our national security and our way of life. But while we focus on the present and the future, we must always remember the past. This is what the Wall of Spies experience will help us do.