Media www.rajawalisiber.com – The Al-Qaeda No. 2 reportedly shot dead by Israeli agents in Tehran in August was planning attacks on Israeli and Jewish Diaspora targets when he was killed, Israel’s Channel 12 news reported Saturday night.

Earlier Saturday, The New York Times reported that Abdullah Ahmed Abdullah, aka Abu Muhammad al-Masri, was killed by Israeli agents at the behest of the US on August 7. Iran denied the Times story, claiming it was “made up information.”

“Abu Muhammad al-Masri had recently begun planning attacks against Israelis and Jewish targets in the world,” the Israeli TV report said, quoting unnamed Western intelligence sources. This further underlined why the US and Israel had a “shared interest” in the elimination of this “arch-terrorist,” it said. The US was seeking him for orchestrating two devastating attacks on embassies in Africa in the 1990s, while Israel alleges he oversaw the 2002 suicide bombing of an Israeli-owned hotel in Kenya in which three Israelis were killed.

The killing of al-Masri was the result of a huge, year-long operation, that went off without a hitch, the Israeli report said. The New York Times story said he was shot dead in Tehran by two Israeli agents on a motorbike, who fired five bullets at close range.

Channel 13 further said Iran now fears further operations against terrorist chiefs in Tehran by Israel and the United States in the final weeks of the Trump presidency.

The Channel 13 news report also said the killing of al-Masri in the heart of Tehran had prompted an intensive investigation by Iran of the intelligence breach that saw him tracked down.

The nature of the killing, the TV report noted, resembled a series of assassinations of Iranian nuclear scientists in recent years attributed in foreign reports to Israel.

The Iranians were now “extremely worried” that Israel or the US, since they evidently have the intelligence, may try to eliminate additional terrorists operating from Iran, from Al-Qaeda and other groups, between now and the US presidential handover in January, the Channel 12 report said.

Channel 13 said it was curious that the US did not publicize the killing of the Al-Qaeda number two, and that President Donald Trump did not reveal the killing during the presidential election campaign. It noted that nobody has claimed the up-to $10 million reward offered by the FBI for information regarding him.

It noted that at the time of al-Masri’s killing, Iran tried to pass off the incident as involving the death of a Lebanese lecturer and his daughter — “fictional figures,” the TV report noted. 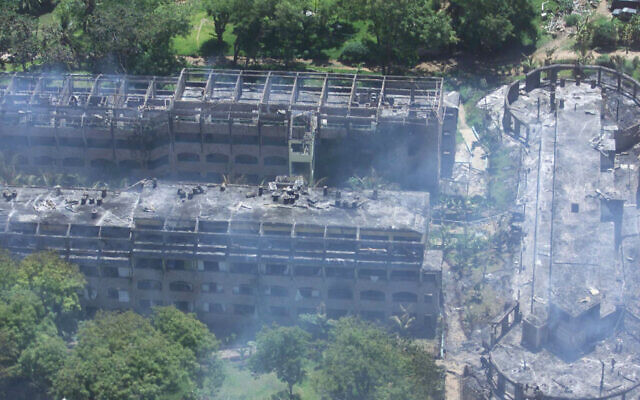 An aerial view of the Paradise Hotel in Kikambala, near Mombasa, Kenya is seen Thursday Nov. 28 , 2002 after it was devastated in an explosion. In simultaneous attacks on Israeli tourists in Kenya, a car bomb exploded at the Israeli-owned hotel on Thursday, killing 13 people, and at two missiles were fired at, but missed, an Israeli airliner that had just departed the city of Mombasa. (AP Photo/Karel Prinsloo)

It added that Israel had an account to settle with al-Masri, while the US account with him was even larger. Al-Masri was allegedly responsible for two August 7, 1998 attacks on the US embassies in Kenya and Tanzania that killed 224, and his reported assassination came exactly 22 years later.

He was also allegedly behind the suicide bombing of the Paradise hotel in Mombasa, Kenya — the only Israeli-owned hotel in the city — which killed 13 and injured 80. The Mombassa blast, on November 28, 2002, took place on the eve of Hanukkah, and the bomb, in a vehicle that plowed into the hotel, was detonated just as 60 tourists from Israel had checked in. Three Israelis were killed, two of them children. 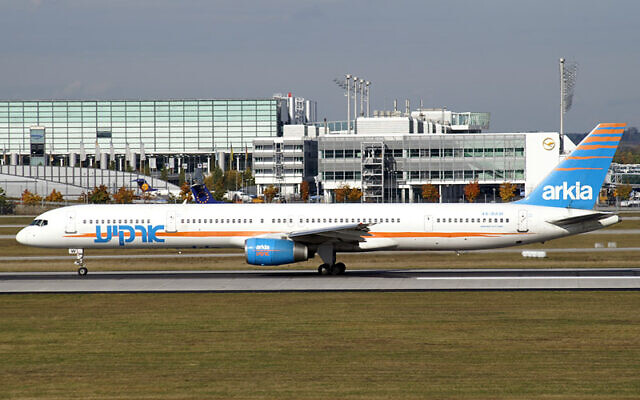 This Arkia Boeing 757-300 was fired at by surface to air missiles as part of the 2002 Mombasa attacks. It is pictured here 3 years later at Munich Airport. (Juergen Lehle / Wikipedia)

At around the same time, two missiles were fired at an Israeli Arkia passenger plane taking off from Mombassa airport with 271 people on board.

The pilots saw the missiles streak past the plane, and considered an emergency landing, but flew on to Israel, and the plane was escorted home by Israeli fighter planes. Israel then temporarily halted flights to Kenya. 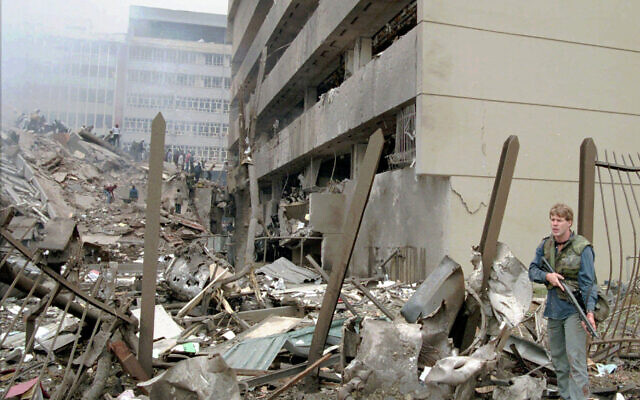 A US Marine officer stands guard outside the American Embassy in Nairobi, Kenya, after a huge explosion ripped apart the building on Aug. 7, 1998. The bombing was blamed on al-Qaeda, and its Africa operative Abu Muhammad al-Masri, who was reportedly killed in Tehran in August, 2020. (AP Photo/Sayyid Azim)

According to The New York Times account of the assassination, al-Masri was driving his sedan close to his home when two Israeli agents on a motorcycle pulled up alongside his vehicle and fired five shots from a silenced pistol, killing him and his daughter, Miriam, who was married to Osama bin Laden’s late son Hamza bin Laden.

The assassination has not been publicly acknowledged by the US, Israel, Iran or al-Qaeda.

The US was keeping tabs on al-Masri and other members of the terrorist group in Iran for years, but it’s unknown what role the US played in the killing, if any.

Al-Masri was one of the earliest members of al-Qaeda and likely the next in line to lead the terror group after its current chief, Ayman al-Zawahri.

Following the shooting, Iranian media identified the victims as a history professor from Lebanon named Habib Daoud and his daughter, Maryam, The New York Times report said. A Lebanese news outlet and Iran’s Revolutionary Guards Corps said the victim was a member of the Hezbollah terrorist group, which is backed by Iran.

Daoud and Maryam did not actually exist, however. One intelligence official, and a former head of Egypt’s Islamic Jihad group, said the persona was an alias Iran provided to al-Masri. 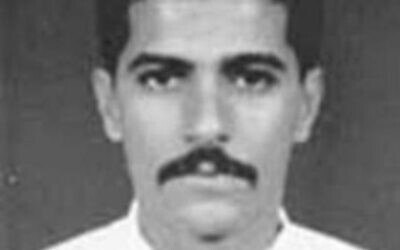 Abdullah Ahmed Abdullah, also known as Abu Muhammad al-Masri, in an FBI post offering a reward for information on his whereabouts. (Screenshot/fbi.gov)

It’s unclear why Iran would harbor al-Masri. Iran is a Shiite state, and has fought with al-Qaeda, a Sunni jihadist organization.

Intelligence officials told the Times that al-Masri was in Iranian “custody” since 2003 and lived in Tehran since at least 2015. While in Tehran, he was protected by Iran’s Revolutionary Guards Corps but allowed to move freely and travel abroad. 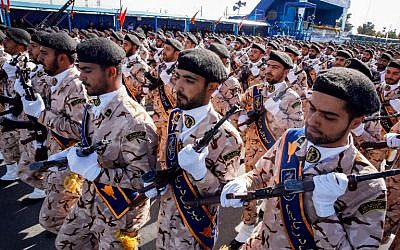 Illustrative: Members of Iran’s Islamic Revolutionary Guard Corps (IRGC) march during the annual military parade, marking the anniversary of the outbreak of the devastating 1980-1988 war with Saddam Hussein’s Iraq, in the capital Tehran, on September 22, 2018. (AFP/STR)

Experts told the Times that Iran may hold al-Qaeda members to prevent attacks in Iran, or to allow them to conduct operations against the US.

Iran has denied harboring al-Qaeda members and did not respond to a New York Times request for comment on the article. Israeli and US officials also declined to comment.

Around the time of al-Masri’s killing, a series of mysterious explosions rocked Iran, hitting several sensitive sites, including the Natanz nuclear facility, a power station, a pipeline and the Parchin military complex outside Tehran.

Iran said in September it had identified those responsible for the sabotage at the Natanz facility, but did not provide further details. Foreign media reports have attributed the explosion, which they said badly damaged an advanced centrifuge development and assembly plant, to Israel or the US.

Israeli agents had in past years assassinated Iranian nuclear scientists using shooters on motorcycles, similar to al-Masri’s killing, according to foreign reports.

Al-Masri was from Egypt and around 58-years-old. He fought the Soviets in Afghanistan with jihadist groups, was then barred from returning to Egypt, and joined Bin Laden. He worked for al-Qaeda in Sudan and Somalia, where he trained militants to use weaponry they then used to shoot down US helicopters in Mogadishu in 1993 in the so-called Black Hawk Down incident. Nineteen American soldiers were killed in the battle with Somali militiamen.

Bin Laden then charged al-Masri with plotting attacks against US sites in Africa, leading to the simultaneous bombings of the two US embassies. The FBI had offered a $10 million reward for information on him. (News Sources: The Times of Israel).