Media www.rajawalisiber.com – Officers conducting first-line checks have only seconds to assess whether a document is genuine or potentially fake. Therefore, it is vital for them to know the signs to looks for.

Criminals and terrorists are known to use illicit travel and identity documents to cross borders undetected. Document fraud also facilitates the exploitation of vulnerable people through human trafficking and migrant smuggling.

Officers conducting first-line checks have only seconds to assess whether a document is genuine or potentially fake. Therefore, it is vital for them to know the signs to looks for.

The Frontex INTERPOL Electronic Library Document System (FIELDS) gives police officers and border guards visual information, in a simple format, on the key markers that can indicate a counterfeit or forged document.

FIELDS is a joint initiative between INTERPOL and Frontex, the European Border and Coast Guard Agency.

The QCC is a visual decision aid. It shows a model of the document being inspected and highlights the key security features to check. The images are compiled by document experts, based on risk analysis, known alerts, and the vulnerability assessment of the document. 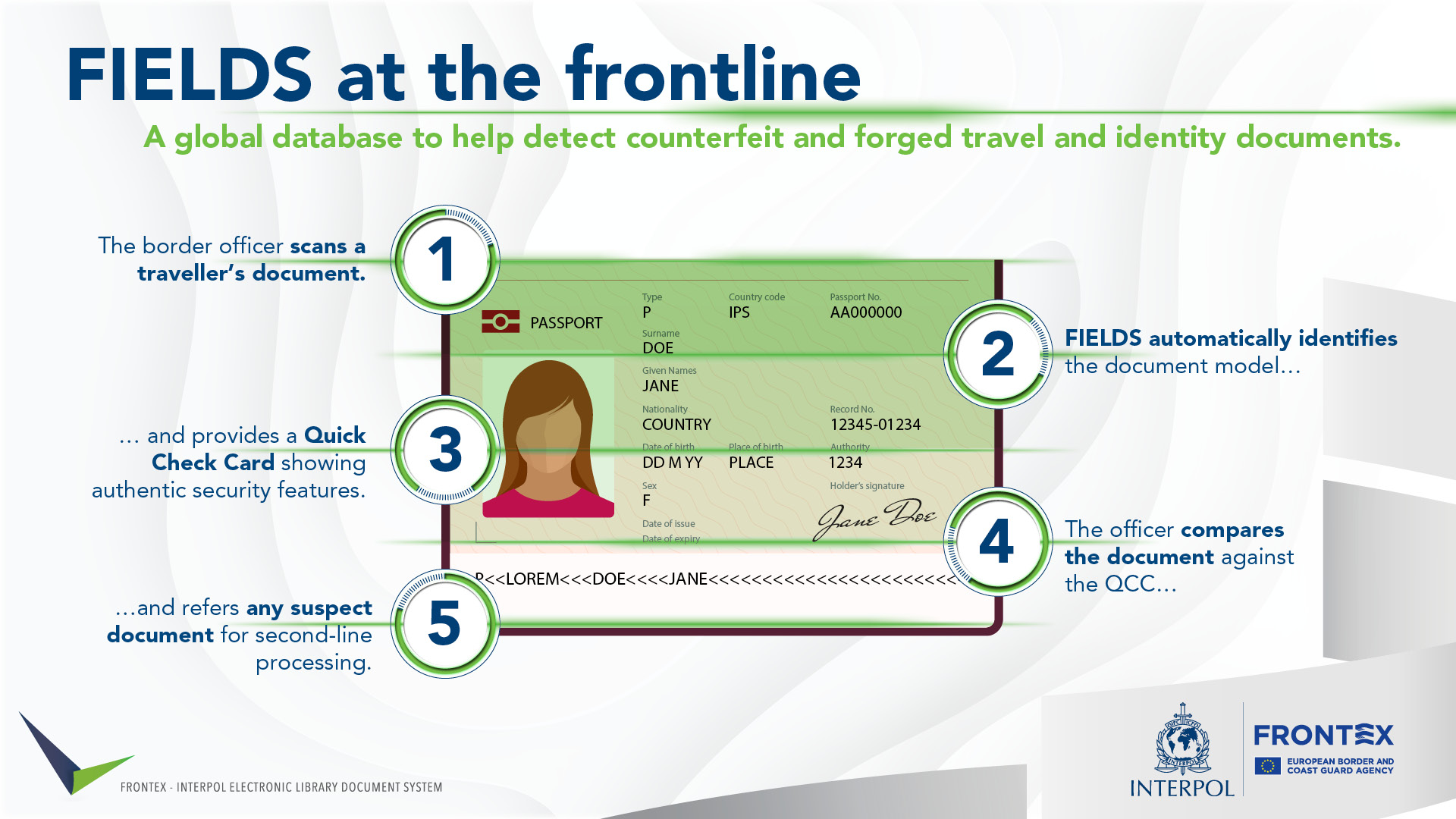 The effective control of travel and identity documents is a cornerstone of border security and successful migration management.

Real-time access to FIELDS – and the QCCs that it contains – during frontline border checks will make it quicker and easier to check the authenticity of travel and identity documents, with more accurate results.

The system is also available via a Web Platform, where second- line and forensic officers can take more time to thoroughly examine the QCCs and Alerts that FIELDS holds. Alerts contain photos and other important information about newly detected forms of falsified documents and are used to notify other countries of fraud trends.

The FIELDS system was launched in 2022, following a multi-year design and development project. The FIELDS Operational Central Unit, made up of document and database specialists, will work actively with experts and member countries to:

In the future, the FIELDS unit will aim to integrate new features such as Artificial Intelligence and compatibility with automated border control booths.

To achieve these goals and populate the database with as much relevant information as possible, INTERPOL and Frontex will continue to rely on the support of their member countries to share document specimens and related information.

For many countries, this will mean establishing networks with the Document Issuing Authorities, who often possess the type of information that FIELDS needs to effectively support frontline officers.

The FIELDS unit will be based at INTERPOL and supported by Frontex expertise and funding, highlighting the Organizations’ joint commitment to bolstering the range of border management tools available to frontline officers and strengthening global security.

Operation Minerva: Frontex and Spain Team Up to Fight Crime

Frontex, the European Border and Coast Guard Agency, and the Spanish National Police have wrapped up operation Minerva for this year. Officers from 22 European countries and their Spanish colleagues managed to identify 118 people suspected of being affiliated with terrorist organisations. They also seized 11 stolen cars and 160 kg of hashish.

The operation takes place each year over the summer months to support border checks in the Spanish ports of Algeciras, Tarifa and Ceuta, which are handling summer passenger traffic to and from Morocco. The joint teams handle thousands of passengers and vehicles during the busiest summer days.

On average, more than 100 Frontex standing corps officers assisted Spanish authorities with checking the people crossing the borders. Among them, dog handler teams specialised in looking for people trying to cross the border hidden in vehicles played a particularly important role.

Urmas, a Frontex standing corps officer, shared his experience from this year’s operation:

“The traffic is high at this time of year – about half of all the yearly external border crossings in Spain happens during the three summer months. We checked two to three million people in this summer operation and had several drug seizures or detections of stolen cars.

“The biggest seizure we had was towards the end of the operation, in Tarifa – the officers discovered 139 kilograms of hashish after they got alarmed by the smell when checking the car’s trunk. Part of the car had to be practically taken apart to get to the compartment.” (You will find a video of this action in our recent post – https://www.facebook.com/watch/?v=1517511718677811)

“Another interesting case took place in June. The joint teams discovered 7.5 kilograms of hashish in a truck. But it wasn’t because of the dog – he simply knew where truck drivers often hide contraband, and he checked this place just in case. This is a great example of harnessing the knowledge and experience acquired over the years – an invaluable factor in all missions.”

As in all joint operations coordinated by the agency, Frontex officers worked under the command of the host country authorities. The main goal of Minerva is to strengthen border security, cooperation among participating authorities, and identify threats to EU’s security.