Judah Ari Gross is The Times of Israel’s military correspondent.

From The Time Of Israel

Media www.rajawalisiber.com  – An assailant was shot and killed after he attempted to stab police officers in Jerusalem’s Old City on Friday afternoon, police and hospital officials said, amid heightened tension as security forces carry out an intense manhunt for six escaped Palestinian security prisoners.

The alleged attempted stabbing occurred at the Old City’s Council Gate, on the northern side of the western Temple Mount wall, police said.

“Soon after 4 p.m., the assailant… armed with a knife arrived at the officers’ post in the Council Gate in the Old City of Jerusalem and tried to injure the forces there. A quick response by the officers and border guards, who opened fire at the assailant, neutralized him before he could carry out this intention,” police said.

The assailant’s knife was recovered at the scene.

According to police, the assailant was a 50-year-old Arab man, a resident of East Jerusalem. Palestinian media identified him as Dr. Hazem Al-Jolani.

He was taken to the Hadassah Hospital on Mount Scopus in critical condition with a gunshot wound in the upper body, where he later died of his wounds, the hospital said.

A police officer was also lightly wounded in the leg, apparently, after being hit by a ricochet, police said. 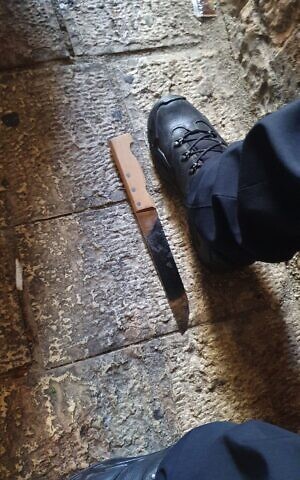 Medics said the injured officer, 19, sustained a light wound to the leg. He was taken to Jerusalem’s Shaare Zedek Medical Center for further care, according to the Magen David Adom ambulance service.

The incident came amid heightened tensions in Jerusalem and the West Bank, following a prison break by six Palestinian security prisoners earlier in the week, though the level of violence was lower than initially feared as of Friday afternoon.

Some 15,000 people visited the  Al-Aqsa Mosque on the Temple Mount for Friday prayers — often a flashpoint for clashes with Israeli security forces — but no such altercations were reported.

However, many Palestinians were seen waving spoons, an apparent nod to how the escapees tunneled out of jail.

In the West Bank, six Palestinians were injured by rubber bullets and 34 from tear gas inhalation during clashes with the Israel Defense Forces, according to the Palestinian Red Crescent.

Israeli security services were put on high alert throughout Israel and the West Bank on Friday, after the Hamas terror group declared a “day of rage” in solidarity with the fugitives who remained on the run.

The IDF  canceled all leave for soldiers stationed in the West Bank as it geared up for possible clashes for the “day of rage,” set to start on Friday afternoon. 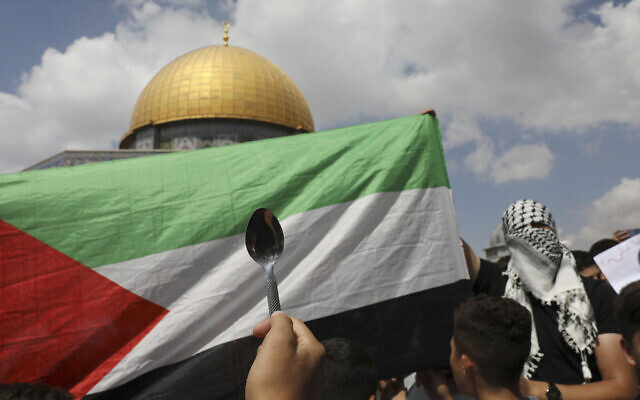 Protesters hold a Palestinian flag and a spoon, which has become a symbol celebrating the six Palestinian prisoners who recently tunneled out of Gilboa Prison, after Friday prayers at the Al-Aqsa Mosque on the Temple Mount compound in the Old City of Jerusalem, Friday, Sept. 10, 2021. (AP Photo/Mahmoud Illean)

Police meanwhile stepped up their alert status to the second-highest level across the country. They also diverted forces to bolster the prison services that have been faced with rioting inside prisons.

The six escaped from the high-security Gilboa Prison in northern Israel in the pre-dawn hours of Monday morning, making their way out through their cell’s drainage system in one of the most serious prison breaks in the country’s history, and prompting a massive manhunt in northern Israel and the West Bank.

Four of the six fugitives were in jail for life in connection with deadly attacks against Israelis; a fifth — notorious commander in Fatah’s Al-Aqsa Martyrs Brigade terror group, Zakaria Zubeidi — was in prison while on trial for two dozen crimes, including attempted murder. Another was held in administrative detention.

All six are considered highly dangerous. 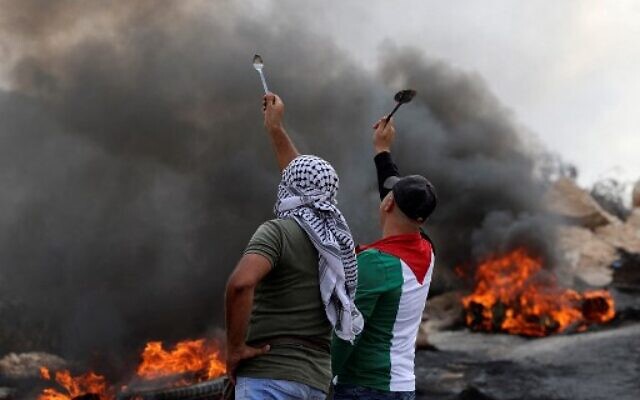 “We are continuing our activities in the field, but at the same time we must understand that these are six men out of millions who live here,” Gantz said, speaking from a lookout in the northern West Bank following a meeting nearby with the military officers leading the search.

“We must be able to deal with these six and their helpers without interfering with the other things in balance in the area,” he said.

The prison break has sparked large, nightly demonstrations throughout the West Bank and Jerusalem, some of them violent, and raised concerns of renewed conflict in the Gaza Strip.

The defense minister made his remarks as the manhunt for the six fugitives entered its fifth day, after the men escaped Gilboa Prison in northern Israel in one of the worst prison breaks in the country’s history.

Israeli forces have scrambled to find the inmates, all of them believed to be highly dangerous, with apparently few leads to follow. In recent days, Israeli troops have arrested many of the fugitives’ family members, including five who were arrested in villages near the northern West Bank city of Jenin in the predawn hours of Friday morning, according to Palestinian media.

Times of Israel Staff contributed to this report